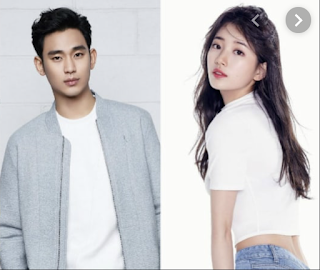 Lee Minho had a huge crush on Suzy since before, but Suzy was very into her then-boyfriend so she rejected him many times. After Suzy broke up, Minho asked her out many times and expressed that he wanted to meet her through mutual connections. Suzy was touched by Minho’s unchanging feelings. They got caught by Park Jin Young but since Minho has a good image, he was OK with them dating until he enlisted. Despite the news on  JYP’s declining stocks, Park Jin Young didn’t care about their relationship much. Minho is very into Suzy and is giving everything for her. Suzy is also falling for him hard. Minho wants to introduce her to his friends and parents, which worries Suzy. Suzy meets up with him with her bare face.


Suzy used to like Kim Soo Hyun a lot. Suzy was in high school back then so Kim Soo Hyun had no interest in her. He was stone cold to Suzy and any other pretty woman. His personality wasn’t very approachable to women in the first place. He was comfortable with talking to ajummas. Because he never dated, there were rumors of him being an alien, gay, and etc. Despite three years of intensive following, the journalists didn’t catch anything on him.


It turns out that Kim Soo Hyun has a woman whom he hasn’t been forgetting for a long time. He started dating her in high school. She goes to Y University. They met when Kim Soo Hyun was in Yonsei Uni’s theatre club. She lived in a luxury apartment in Dogok-dong and Kim Soo Hyun’s place was a rented room beside the apartment. Every time he walked her home and went to his place, the strange emotions hit him hard. Kim Soo Hyun struggled to pay his tuitions and medical fees (he has a heart disease), and she covered a lot of it for him. Her family is one of the top political families in Korea.


When they were dating, Kim Soo Hyun was a high school graduate who couldn’t even pay for his bus fares, had bad health, and from a poor family. His parents separated when he was young. He had half-siblings and his father was a free spirit. His physical health was also suffering. The girl’s parents didn’t even object to their relationship because they assumed they’d break up eventually. In fact, they did break up later.


Kim Soo Hyun is supporting his biological father financially even though the father had basically threw away his son and wife before. He’s supporting his father’s new wife (now separated) and his half-siblings as well. But he’s very strict about his financials in case his family causes financial trouble and made it just enough for them to get by. Because he’s an only child, he cares about his half-siblings. He’s still not over the girl and thinks about her whenever he acts.


4. [+39, -0] Even if this is true, I realized that there’s a reason why celebrities suffer from mental illness. The person who leaked this must be a close friend of a top celebrity. They can’t share their stories with anyone because it’ll still be leaked.