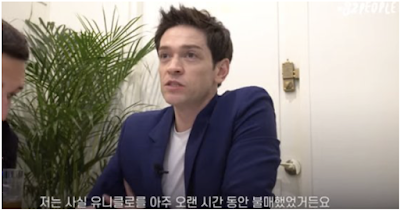 “I heard that Uniqlo is supporting Japan’s claims that Dokdo is a Japanese territory. Because of that, I’ve never shopped at Uniqlo in the last 2 years. As a foreigner living in Korea, I believe that it’s a matter of loyalty to Korea. In that regard, I’m also participating in this boycott. I don’t use any Japanese products. However, I’m not sure if boycotting Japanese products is the best way to criticize Japan. It could worsen the Korea-Japan conflict and affect innocent people in both countries.”
“Japanese people are not interested in the history. Some Japanese students don’t even know when WW2 ended. At least they should know when the war started, what the countries did, and the alliances. In Germany, 80% of history education in middle school and high school covers WW1 and WW2. We learn what Germany did wrong.”
“Germans are objective when it comes to history. We reflect ourselves. Koreans like the fact that Germany apologized to the countries of the victims. In that aspect, Germans are sincere. But just because Germany apologized, it doesn’t mean that Germany is the nice one and Japan is the bad one. Geographically, Germany is the center of Europe. There are so many countries surrounding Germany. When the war ended and Germany went bankrupt, they had to apologize to the nearby countries and form economical relationships with them to re-establish the country. On the other hand, Japan is an island. After the war, they got help from the US and became an island of the US. They didn’t need to apologize to nearby countries.”
“Germany has many problems regarding to Nazi. Germany apologized to the victims of forced labor in early 2000’s. It was a very late apology. And it’s not like we apologized to everyone yet. We apologized to the Jews but not the African victims.”


Article: “Loyalty to Korea, not shopped at Uniqlo for 2 years”… Japan boycott from Daniel’s perspective


5. [+129, -6] Sujan from Abnormal Summit also posted on Instagram. He wrote Abe’s stupid sayings in 3 languages and asked people to spread the post. I was thankful.


6. [+125, -1] I watched the full video and this is what he said at the end. “Germany was surrounded by developed countries. So if they didn’t admit their fault quickly, their national operations could’ve gone bad. That’s why Germany was quick to sort out their history. So it’s not always right to see Germany as the kind one.” What he said was right but the important fact is that it was coming from a German. Daniel saying “Germans are not special” actually made them special to me.


8. [+102, -6] Abnormal Summit would be so much fun if they start a new season now. There are many topics they could be talking about. Koreans should be ashamed to see a foreigner thinking like this and putting into actions.