Lawyer weighs in on Hyuna and Jessi’s over-exposure controversy A Korean lawyer has weighed in on the Hyuna/Jesse over-exposure controversy.

‘Weekly Entertainment Court‘ addressed the controversy involving the two label mates Hyuna and Jessi through the eyes of lawyers via a consultation with a guest lawyer on the program. 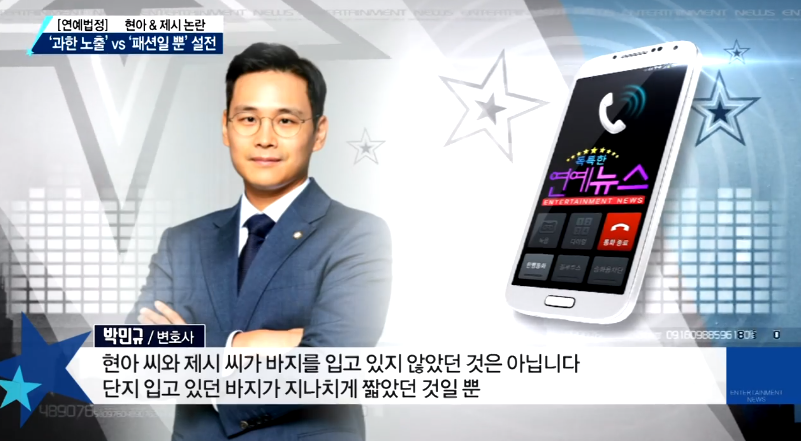 Regarding Hyuna’s over exposure at a university festival on the 19th where she rolled up her skirt mid-performance and Jessi’s “no-pant” fashion, lawyer Park Min-gyu said, “Because Hyuna and Jessi weren’t naked, it’s hard to apply the sexual harassment clause. It’s just that what they were wearing was too short but it wasn’t obscene.”

The controversy surrounding the two also seems to have intensified as the festival videos and airport departure photos spread rapidly online, raising questions whether the people who took and circulated the videos and photos can held accountable.

Regarding this Park Min-gyu stated, “The reason why it was controversial, was because Jessi’s clothes and Hyuna’s performance was too provocative. It’s unlikely anyone who took and distributed the images and photos would be held accountable.”

Regarding the criteria for punishing performance-related crimes and misdemeanors, he explained, “I’ts simple. To the extent of bringing shame and discomfort to others then it’s a misdemeanor. If it stimulates the sexual desire of the general public, it’s performance-related abuse and applied based on level. But it’s very difficult to strictly distinguish the standard in practice.”