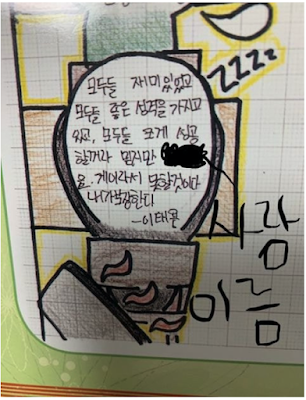 “I had fun times with everyone and everyone had a good personality. I believe you’ll all succeed but (student’s name) won’t because he’s gay. I guarantee it.” – Lee Tae Yong


1. [+220, -13] “Everybody will succeed but you never will because you’re gay”? Is he crazy? Super M is to advance into the US so I’m sure the US is sensitive about things like this. His character…


4. [+95, -1] He wrote this on a graduation album where everybody can see. The person who publicized this is a sexual minority. Even if the student wasn’t actually gay, Taeyong is still punishable for defamation of character. Taeyong is a criminal.


6. [+86, -0] Why do the fans try to claim that he apologized ㅋㅋ Of course he should apologize. Even if he’s forgiven, his fault still doesn’t disappear. Taeyong said he’s in pain from the guilt but he actually didn’t apologize to his victims? You guys hate it when we say NCT won’t succeed because of Taeyong, but you should be behaving better.


7. [+72, -0] I can only think of karma when I see him. He used to body-shame girls and now he’s getting insulted for his proportions. He said the student won’t succeed because he’s gay and now people are criticizing him for being the reason for his group’s failure.


11. [+45, -0] His fans said he cried and apologized, so I watched the video. He didn’t specify anyone, he said ambiguously that he was sorry to those who were hurt. His main point was thanking the members for believing him.


13. [+42, -0] It’s not a mistake he made from being unaware. He did that because he’s actually a really bad person. The fact that he even thought of saying things like this is terrible.