OP on Twitter says their flight was delayed because of Seventeen 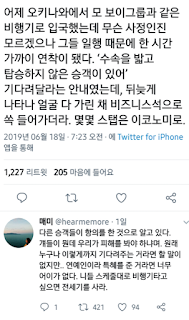 “I got on the same plane with a boy group in Okinawa yesterday. I don’t know the reason but because of that boy group, the flight was delayed for an hour. The announcement said we had to wait because “there are passengers who checked in but didn’t get on the plane”. They showed up later with their faces covered and went straight to business seats. Some staff members sat on economy seats. Some passengers complained and asked why we had to take the inconvenience for them. I won’t say anything if this was a situation where it had to be delayed no matter who it was. But if this was special treatment for celebrities, I’ll be very baffled. If you want to use the plane according to your own schedule, buy your own.”

Pann: Idols who were a nuisance to a flight

1. [+382, -16] The plane would’ve just taken off if it was non-celebrities, so funny. Celebrities must be happy with all these special treatments~

4. [+195, -3] They’re only getting this much of hate because they’re not popular. If it was a 1st tier group, it would’ve been a top post within 3 hours with more than 1k likes and with much more hate ㅋㅋㅋ

5. [+167, -9] It’s a special treatment. I used to be a flight attendant. In the airport, you can see ground staffs running around and shouting names. That’s for finding passengers who checked in but didn’t get on the plane and are still shopping around in duty-free shops. The ground staffs have to run around a lot and even have to make calls to find them. But waiting for an hour instead of finding them early? That’s a special treatment. If they don’t get on the plane, the plane can’t take off.

6. [+163, -1] If they didn’t check in, they’re just no-show passengers so the flight would’ve taken off without them. But if the plane had to wait for an hour, it means the idols checked in, went through the customs, checked in their luggages, and were in the duty-free area. What was their reason for being late, then?

7. [+146, -4] If they had to wait, it means the idols went through the customs and were in the duty-free area. How can they just hang around and disturb others by being late? Nugus causing trouble.

8. [+115, -3] I read OP’s tweets. Apparently, the flight was already delayed for 30 minutes and it was delayed by another hour because of Seventeen. How can the passengers not be pissed off at this?

9. [+91, -5] Due to security reasons, if someone went through the customs and didn’t get on the plane, the plane can never take off no matter who it is. It’s because someone might put explosive stuff in their checked in luggage and avoid the plane. If this is true, the idols are at fault for being late for no reason.

12. [+68, -0] Are they crazy? They checked in and everything but they kept hanging around while knowing that their plane was getting delayed for them.