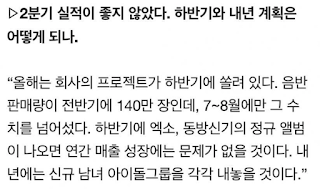 
SM) For this year, our agency’s projects are all crammed into the second half of the year. The total physical sales were 1.4M in the first half, and we surpassed that amount in just July~August. After EXO and TVXQ release their full albums in the second half, there won’t be a problem in the annual earnings. For next year, we will debut a new boy group and a new girl group.


1. [+66, -2] I think the girl group will have a lot of members like SNSD. The current trainees are known to be so-so but I’m sure they’re hiding some unofficial ones. I think the boy group will be NCT.


2. [+64, -2] NCT127 is still a 2nd tier… and they’re debuting another boy group? I’m really curious whether they’re getting their hands off of NCT project or launching a new one into it.


3. [+42, -3] Why don’t they use the effort to push EXO instead? The year’s coming to an end, what have they been doing? No wonder why they’re not getting good results.


5. [+19, -0] “No problem with the earnings since EXO and TVXQ will release full albums”… Our kids became the official money grabs.


7. [+15, -9] The boy group is NCT for sure. I hope the girl group is pretty and hard-working kids. Red Velvet is such a mess. I hope they pick fine kids who suit SM’s reputation. There isn’t a male idol that had a controversy for lack of effort, Red Velvet is the only one.