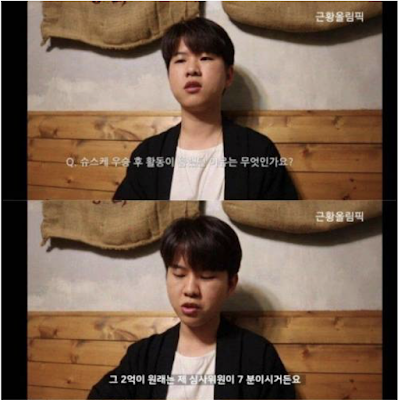 Q) What was the reason why you rarely promoted after winning ‘Superstar K’?


A) The prize money $200K was supposed to be used for the 7 judges. I was supposed to release 7 songs given by each judge. Only Brave Brother and FNC gave me songs. I haven’t heard anything from the rest. I want to keep working with them.


Summary: The prize money of winning ‘Superstar K’ is $500K. $300K is paid for tax and the rest of $200K money is used for the winner’s debut album production. The $200K is paid to the 7 judges and the judges have to give the winner a song, total of 7 songs. The judges were Gummy, Gil, Ailee, Kim Yeon Woo, Kim Bum Soo, Brave Brother, and Han Sung Ho. Only Brave Brother and Han Sung Ho gave the winner songs.


Pann: Whereabouts of the last winner of Superstar K


6. [+83, -0] Wow, they’re robbers. This needs more attention. How can they crush a young man’s dream like that? Swallowing all that money and ignoring him like that, what delinquents.


7. [+68, -1] It’s not like the singers don’t have money. How can they be acting like that just because it’s not their business? I hope the winner finds strength.


9. [+54, -0] The judges themselves aren’t even doing that great. Gummy and Ailee? It makes me laugh ㅋㅋㅋㅋ The judges should be those who are able to compose songs with a mindset of a producer. They’re all irresponsible. Fraud Mnet.