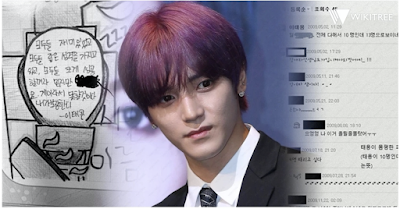 Summary of the Wikitree article:


1) Taeyong’s homophobic comment on graduation album was indeed written by him. However, the student said, “I was a close friend of Taeyong’s. The comment didn’t offend me at all.”


2) As soon as Taeyong finished his US promotions, he came to Korea and met up with a victim of body shaming. The victim started crying and it took an hour for them to start talking. Taeyong first began by apologizing to the victim. They talked for 2 hours and the victim forgave him eventually.


2. [+214, -63] A lot of non-fans will misunderstand when reading this article. It makes it seem like Lee Taeyong is the one who started all the bullying. Since this article is saying that all his past controversies are true, people will think his scamming controversy is also true. I thought his scams were true but they weren’t. They were just failed transactions.


3. [+125, -23] Us fans never claimed that Taeyong didn’t do anything wrong in the past. We were staying neutral until there was an official statement. It was just trolls and antis who were trying to bring hate to our fandom. We’ve seen how Taeyong has been reflecting and apologizing for his past mistakes. That’s why we’ve been cheering for him. He must’ve been tired from his Super M promotions in the US. I’m so glad that he met the victim and apologized as soon as he came back to Korea. Please know that fans aren’t shielding him blindly.


4. [+98, -17] I’m not saying that what he did was good but I’m surprised because I’ve never seen an idol who apologized directly like this. A lot of popular idols have controversies of school bullying and bad comments.


5. [+85, -5] I’m not saying that the comment on graduation album isn’t problematic but the student was a close friend and he didn’t find it offensive at all. I just don’t understand why a third person bothered to publicized it by showing it to sexual minorities. I’m also unsure if we could judge him for something he did 10 years ago.


6. [+67, -7] Wow, he still met up with the victim and apologized. The victim did forgive him and want him to promote, so… And he didn’t out the gay student.